Home
About Us    Introduction to Genetic Testing    Test Menu    Contact Us
See Also
What is Genetic Testing? What is DNA? What is a gene and what does it produce? What is a mutation? Are all mutations harmful? How common are mutations? How do I know that I have a mutation? Why should I know that I have a mutation? How can I interpret the results? Can my physician order Genetic Testing for me? Would my medical insurance cover the costs of genetic testing? Shall I consult with a Genetics specialist or my physician? What is the difference between homozygous and heterozygous?

What is the structure of a protein?

Proteins are the building blocks of our body; good examples include muscle and bones. Proteins also conduct the chemical reactions and signal transmissions in specific pathways in our cells. Proteins are amino acid sequences, which assemble into certain structures according to instructions provided to them by their respective coding genes. Every combination of three nucleotides in DNA (called a codon), codes for one specific amino acid. So if a protein is 100 amino acids long its gene should contain 300 nucleotides.

Proteins are where the effects of mutations are felt. If there is a mutation in an exon in DNA sequence then a wrong amino acid is incorporated in its protein structure. A wrong amino acid could change the structure of a protein such that its function is either reduced or lost. Since each protein is specialized to be part of a structure or a chemical pathway in our body then its lost function will have negative consequences and lead to diseases such as genetic disorders. 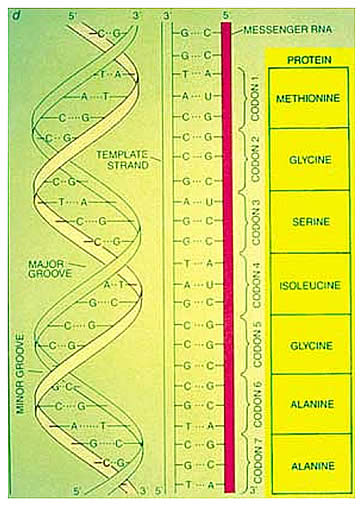